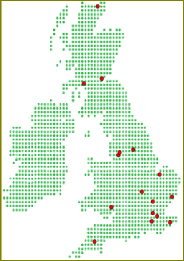 Grant funding is now being provided through the national Growth Accelerator programme, access to the programme is focusing on high growth businesses.

In order to get access to the funding you will need to apply to join the scheme. To do that you must demonstrate the will, opportunity and capacity to grow your business. The initial stage is to assess whether training or coaching is best suited to your needs.

Below are a number of companies where we have delivered a successful business turnaround, they vary in turnover from £200,000 to in excess of £20 million. If you don’t see your industry represented it doesn't mean we haven’t dealt with a similar business in the past; contact us and we’ll be able to tell you.

We were called in to undertake a  business turnaround in a well respected automotive engineering business that was losing money despite reasonable sales and a good reputation. We were able to quickly identify the main issue which was week business and management processes. By providing direction and focus we were quickly able to increase turnover by 40% stemming the loses and providing time to review funding and most importantly pricing strategy. This was then handed over to a full time replacement MD to continue the business turnaround.

We undertook a business turnaround of an engineering company getting it to recover from a loss of £250,000 to a profit of £56,000 over 12 months. Having suffered long term decline as a result of “benign neglect” from its previous owners, we worked alongside the new management team and undertook a full company review. The resulting action plan addressed all the areas of the company from pre sales through manufacturing to post sales support and credit control.  We are providing ongoing advice and support.

We have undertook a rapid business turnaround  a subsidiary of a FTSE 250 IT Services Business which was losing £80,000 per month to break even in a period of six months, without the need for large scale redundancies. This was achieved by  refocusing sales away from non productive areas, increasing activity and focusing on well targeted revenue opportunities and streamlining management to make the more effective and responsive.

A restaurant business had run into some serious difficulties. At the point we were introduced they had been given notice by their bankers that it was commencing legal action on mortgage arrears and notice to move their banking arrangements with 4 weeks. They  also had a number of court actions pending including  a winding up petition.  We reorganised the business to focus on  higher margin products and undertake proper portion control  at the same time were arranged an extension with their bankers to find alternative mortgage and banking providers. This was achieved within 12 weeks,  We were also able to negotiate a stay on the winding up order which was subsequently repaid using secured lending.  We then worked with the owners to develop a low cost marketing campaign to help build revenues for the future.

We enabled a £5m T/O transport business to restructure and rid  themselves of operations losing £160,000 and return a profit of £250,000 on a much streamlined operation. We enabled the owners operate a business on a 9-5 basis rather than as previously  working 12 hours per day  often for 7 days a week.

A retail florist was in serious trouble, we liaised with their creditors including HMRC to reschedule payments of arrears in a way that was sustainable in addition we worked with the owners to restructure their operations to develop a viable business.  We focused on cash flow and overhauled their buying process to match it more accurately with sales forecasts and reviewed suppliers to make sure we obtained the best deals. We helped rationalise the outlets to make the best use of staff and reduce overheads.

A beauty salon in central London had run into some serious cash flow problems as a result of poor sales and faced with significant relocation costs as their short term lease was coming to an end. We were able to quickly identify short term revenue opportunities to develop complementary services  around  their core business. We also worked with them to restructure their debts and helped find affordable alternative premises.

A building maintenance company was losing  money despite having  plenty of work. After a thorough review of the business we identified a number of management and  process problems. We obtained cash flow funding to bridge the short term cash issue and then set about developing the appropriate management processes including proper job costing and post completion project reviews to identify reasons for cost overruns and put in place steps to prevent them happening in future. We also worked with them to improve their finance and credit control.

We worked with an online travel business, which was suffering declining revenues. The business was suffering because the supplier of seats was going direct to the public and at the same time reducing our clients margin on business he sold. We developed with our client some customised packages to provide a more differentiated proposition and enabled him to sell the business at an acceptable return. We subsequently worked with them to arrange the sale of the business.

An Office Supply business had got into trouble as a result of a  relocation which reduced its retail footfall and left it with substantial dilapidation costs on its previous lease. We initially obtained some cash flow funding to help address the costs in the previous lease arrangement, from there we reorganised and marketed the retail side of the operation and moved back into break-even in 8 months. We subsequently facilitated a sale of the business.

A software products business has hit financial difficulties because its sales function was misfiring. There were no new prospects appearing and an audit of the “current” list showed it was poorly qualified and over optimistic. Working with the owners we put in place a programme to protect their cash flow and at the same time develop their current sales team to be more productive and using other members of the management team to support them to identify opportunities and close short term business.  The business is now back on track and growing.

A  Central London Hair Salon was losing money, it was behind with VAT and Tax. It also had significant rates arrears with other major creditors. The first priority was to ensure survival by negotiating time to pay with these important creditors that we know the company could meet its ongoing commitments. We then looked at the business in detail and identified the underlying reasons for the companies poor performance. This led to a more focused marketing activity and seeking to maximise revenue in the quiet early days of the week and providing the owners with some time away from the business to recharge their batteries.

Due to external problems and bad weather prior to its Christmas peak sales time we faced a difficult business turnaround or a company that was very short of cash and was facing the quietest time of the year. We acted quickly to reduce outgoings and negotiate with their suppliers to deliver more on a "just in time" basis. We also used  social networking to build the brand and develop customer loyalty. Within 12 months we had paid back the overdraft and generated a healthy profit.

For a Free Confidential Discussion

We had uncovered a serious problem in our business and felt we did not have the skills to solve ourselves. We contacted Exigent and they quickly grasped the severity of our situation. They set about immediately contacting the relevant parties to come up with a resolution.

They have been instrumental in keeping us afloat.

Working With Us
Mentoring

Do You Need A Turnaround Specialist?